The talk of the Toon: "We Are The Geordies" 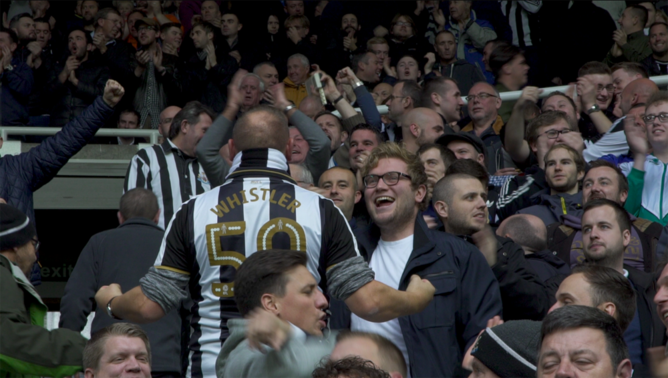 Sunderland get their own Netflix-slick television series; Newcastle responds with a plucky, independently produced documentary. Arriving slightly behind schedule this weekend, We Are The Geordies offers a record of the 2016-17 season, when Newcastle United were battling in the Championship, having been relegated from the Premier League the season before. The club had one trump card: Spanish manager Rafa Benitez, broadly as adored hereabouts as he is on Merseyside. It also had one unresolved issue, in the ownership of Mike Ashley, or "Sports Direct boss Mike Ashley", as everyone now appears honour-bound to refer to him. The documentary has one glaring liability - the heart sinks when you realise it - connected to the economics of modern football: directors James DeMarco and Zahra Zomorrodian haven't been able to license all the match footage, which leaves at least the film's first half more reliant on local radio commentary and post-match phone-ins than you'd hope a theatrically released documentary would be. Yet they turn it around, and they do so by turning the extra time this affords them to their considerable advantage. What they've come up with, instead of the usual DVD-ready season review, is a portrait of what are widely regarded as among the most passionate fans in the game, some grabbed in passing outside the ground - as close as the filmmakers could get to the action on certain matchdays - some followed home and set in greater context.

In doing so, We Are The Geordies builds a surprisingly substantial case in support of the ever more popular motion that fans are far more essential to clubs' identities than sponsorship deals, broadcast rights or moneyed owners - a sentiment that feels doubly important to carry in a moment when so many of those moneyed owners are contentious, to say the least. (Again, I feel obliged to note I write as a Coventry City fan.) What DeMarco and Zomorrodian captured over these eight months of filming was some sense of how success on the pitch can help supporters get past any egregious turmoil or rank mismanagement off it: sometimes three points is enough to keep us happy. It's rare to encounter a film so dependent for its success on viewer awareness of the significance of Jonjo Shelvey, and even if the filmmakers had obtained access to every minute of every game, there's only so much drama and tension you feel they could milk from a season where Newcastle were in the top two after five games, and stayed there until May. What We Are The Geordies has in spades, however, is that scrappy spirit one sometimes feels upon walking away from the ground after a hard-earned last-minute victory. Mixed like this, the cheers ring in your ears, and St. James's Park, captured from just about every angle and at every hour of the day, really does look spectacular. It'd be nice to get some of these fans back in there soon.

We Are The Geordies will be available to stream, and on DVD through FNA Digital, from tomorrow.