Something in the air: "Wind" 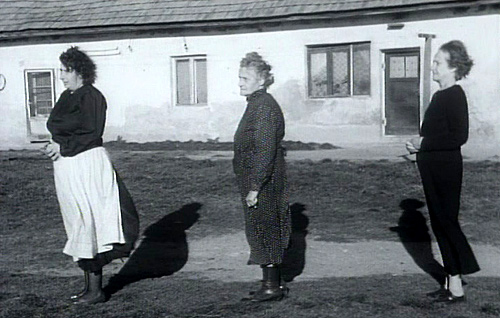 The six-minute Hungarian winner of Cannes' Best Short Film prize back in 1996 - now available for rediscovery courtesy of MUBI UK - Wind resembles some long-lost collaboration between Michael Snow, the Canadian artist behind revered experimental texts Wavelength and La Région Centrale, and Béla Tarr, reigning Hungarian champion of slow cinema. It comprises a single, unbroken 360-degree pan, opening on a recreation of "Three Women (Audincourt, France 1951)", a photograph by the Le Corbusier associate and former French Resistance agent Lucien Hervé, before breaking free from the moment in time captured therein to become its own, haunting thing entirely. What follows is a quietly unsettling glimpse of everyday horror, and possibly an attempt to describe just how Hervé arrived at this particular scene, or at the very least to answer one of the more obvious questions posed by the original image. Writer-director Marcell Iványi - then a 23-year-old student at the Hungarian Academy of Drama and Film who, in another of the short's attendant mysteries, went on to no kind of career whatsoever - packs a lot into a mesmerising six minutes: not just a small but considerable feat of location management and camera choreography (alighting with an equal care and fascination on a hollowed-out rural landscape and the lived-in textures of an overcoat), this is also as teachable a definition as I've encountered of the difference between stills photography and cinema.