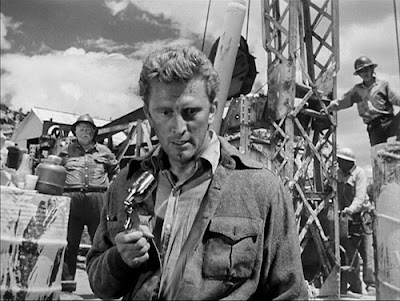 Ace in the Hole is a shoo-in for inclusion on any list of the most cynical movies ever made, and further evidence of what a magnificent sourpuss Billy Wilder could be. Kirk Douglas's washed-up newspaperman Charles "Chuck" Tatum arrives in a tow-truck at the offices of the Alberquerque Sun-Bulletin, having been fired from every publication on the East Coast. Dispatched on a rattlesnake hunt (for which read: wild goose chase), he happens across the "public interest" story of a man trapped under a rockslide in the mountains of New Mexico; sniffing Pulitzers in the air, he attempts to spin the story out as long as possible, appointing himself master of ceremonies at a 24-hour, seven-day carnival of American exploitation. The air pocket supporting the victim becomes as a window of opportunity, seized upon not just by Tatum, but by the man's feckless wife (Jan Sterling), a corrupt sheriff, and a horde of hucksters who show up to make a buck off the rubberneckers gathering at the site.

Shot on location and expanding with every scene - to take in cars, caravans, trains, a fun fair and even a charity record knocked out in support of the trapped man - it's as close as Wilder ever got to directing a disaster movie, only that disaster isn't anything as obvious as a rockfall, instead the gradual erosion of principles; the second of its twists is that Wilder rather gets off on it all. (You can intuit this from the film's representatives of virtue - Tatum's ineffectual editor, clinging in vain to his "Tell the Truth" embroidery; a dissident driller; the trapped man's parents, simply packed off-screen to church - who are characterised in thoroughly colourless fashion.) The manner in which Douglas's semi-heroic monster is finally made to seem vulnerable could be seen as a weakness in an otherwise genuinely hard-boiled work, and it's arguably doing no more than rehearsing the theme of the later, better-known The Apartment (namely, that everyone has their price) on a grander stage - but watch it in this post-Madeleine McCann, mid-Leveson era, and tell me its vision of the popular press isn't still supremely relevant.

Ace in the Hole is presently out of circulation in the UK.
Posted by Mike McCahill at 03:41