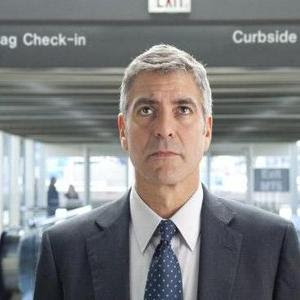 The Oscar frontrunner Up in the Air proves old-fashioned in many respects, yet it can boast one first for cinema, and perhaps the world entire: a dashing management consultant. George Clooney’s Ryan Bingham, efficiency expert for the “Career Transition Corporation”, wields the axe with skill and some sensitivity, reframing the sack as an opportunity for his victims to resume pursuit of those dreams they were following before they took the company shilling. Hopping from town to town, Bingham’s work is quick, easy and above all steady; the film’s subtlest and bleakest joke is how his chopping block never rests.

Bingham’s kingdom is the executive airport hub: he’s developed whole philosophies about hand luggage. There is, it must be said, little else for him to be carrying around. It’s obvious - perhaps even to himself - that Ryan Bingham is a shell of a man, barely a suit and a smirk. His jetlagged soul, usually secured in the overhead locker, is awakened one night in a Dallas departure lounge, where teasing fellow traveller Alex (Vera Farmiga) is intrigued by the high-end loyalty cards in his wallet. The pair click instantly, turning their overnight into a layover: might this be the synergy that white collars dream of?

As directed by Juno’s Jason Reitman, Up in the Air remains throughout a remarkably busy film: aside from this budding romance, it juggles Ryan’s bid to clock up ten million air miles; the preparations for the wedding of our hero’s sister; and his schooling of a young upstart (toothy Twilight graduate Anna Kendrick, like a shark in Donna Karan) determined to replace Ryan’s expertise with a computer. The crucial support here comes from Palm Pilots and BlackBerrys: “I Googled you,” Alex tells Ryan, “It’s what modern girls do when they have a crush on someone.”

Reitman takes care to personalise his PDAs, backing up the premise of his script - “life’s better with company” - by ensuring the film generates more fun the more people there are on screen. Clooney’s done slick before, but here he sparks off Farmiga to the point the two begin to finish one another’s sentences. In a terrific, zippy scene, these two find themselves counselling a distraught Kendrick about her life choices in a hotel foyer; there follows the most joyous corporate jolly ever filmed, complete with free bar, karaoke and a cameo from the Young MC.

What we’re offered is smart, polished viewing - the type of human comedy Billy Wilder once made, and which, like most of Wilder’s features, you can imagine playing perfectly well on TV in fifty years’ time. I just wonder whether Up in the Air isn’t a mite too polished. Reitman’s decision to bolster his fictional universe with talking-head snippets from victims of real-world Binghams seems either superfluous or exploitative: a demonstration that Hollywood can fold even economic downsizing into an uplifting entertainment. While you submit to the film’s warm embrace, you’re aware it could look from the outside like a group hug for the sales team on the occasion of a job well done.

For all its breezy comedy, the film has a shrewd head for business: it knows full well what audiences want - maybe need - to hear at this moment in time, even as the dehumanising corporate processes Ryan Bingham comes to reject only show signs of accelerating as the credits roll. The ace in the hole is the heart with which Reitman and players supplement - and, in Up in the Air’s best moments, transcend - such diamond-hard professionalism: between them, they’ve found fresh, funny and engaging ways to enact the time-honoured custom of individuals striving to make a connection.


The week’s other major love story proves more surprising. Dylan Southern and Will Lovelace’s unusually frank and touching documentary No Distance Left to Run follows Blur on last year’s reunion tour, a revisiting of old haunts that triggers memories of how far the group have come together. The frost between ambitious frontman Damon Albarn and self-effacing guitarist Graham Coxon - cause of the initial split - visibly thaws as the band collectively realise how much they were missed, and just how much they missed each other’s friendship. More than an essential chapter of recent pop history, the film depicts a very British romance, one that reaches its lowest ebb with the titular lament, before arriving at a stirring finale on the fields of Glastonbury.


Further leftfield camaraderie in 44 Inch Chest, another scabrously funny script from Sexy Beast duo Louis Mellis and David Scinto that lacks but one element: a satisfying last act. The set-up’s promising enough - cuckold Ray Winstone is talked into kidnapping his wife’s younger lover with an eye to doing him in - and you can’t fault those doing the effing and jeffing: John Hurt rather wonderfully channels Prince Philip and Albert Steptoe in ill-fitting dentures. It’s only halfway in you realise all the creative profanity’s a mere stalling device for a plot with nowhere to go. Instead of Sexy Beast’s dazzling surrealism, prosaic staginess sets in, leaving the title an arbitrary come-on: it might as easily have been Six Characters In Search of an Ending.
Posted by Mike McCahill at 10:25